Novelist, columnist, screenwriter and political activist Manda (MC) Scott trained as a veterinary surgeon in Glasgow and worked at the Universities of Cambridge and Dublin, specialising in anaesthesia. A brief three year stint as a Director of the computer games company Frontier Developments bridged the gap from veterinary medicine to professional writing.

Her novels have been short listed for an Orange Prize, nominated for an Edgar Award and translated into over twenty languages.  She was a long term columnist for the Glasgow Herald, is a reviewer for the Independent and has contributed to the Telegraph, Times, Daily Express and BBC History Magazine. She has appeared on Time Team as an expert on the Boudican era and on Radios 4 & 5 as a reviewer and commentator. She is the founder and former Chair of the Historical Writers’ Association.

Her early crime thrillers were all set in Scotland, while her move to historical novels took her south for the international best-selling Boudica: Dreaming series and then further afield for the ROME series of ancient world spy thrillers.  Her most recent novel, INTO THE FIRE is a dual timeline thriller featuring Capitaine Inès Picaut of the Orléans police as she investigates the third in a series of fires that are eating her city – an this most recent has eaten a man, too.  As the investigation continues, Picaut comes to understand that the lies and spin of the present are intimately linked with the lies and spin of an ancient past: the life of Jehanne d’Arc, known as the Maid of Orléans: the saviour of France, who was not the vapid mystic peasant of myth – although so many have invested so much in the mythology that they will kill to preserve the fiction.  As her investigation continues, so does that of Tod Rustbeard, adventurer, mercenary and spy, sent into the camp of France’s new military commander, to find the truth of her origins and to use that truth to destroy her. A Sunday Times Book of the Month/Year and ‘a Masterclass in historical writing’, this book breaks genres and sets a new baseline for multi-time line writing.

She is working on a sequel ACCIDENTAL GODS which continues the lives of the survivors of Into the Fire’s contemporary thread with the historical thread set in WW2 – exploring the relationship between with NSA/GCHQ and the SOE/Jedburghs agents of WWII.

She is also working on a television version of INTO THE FIRE, bought by a UK/US consortium and with the contemporary action moved to the US in 2020: what will America look like after four years of Trump/Bannon in the White House and with the next election on the horizon?

She is currently also taking an MA in Economics for Transition (that’s transition to a sustainable economy) at Schumacher College in Devon with particular interests in Universal Basic Income and the use of time in an automated culture – and in regenerative (Carbon negative) farming. 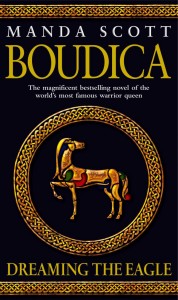 ROME: The Art of War

Rome: The Coming of the King

Rome: The Eagle of the Twelfth