Amanda Cockrell, writing as Damion Hunter, is the author of seven Roman novels: the four-volume series The Centurions, concluding with The Border Wolves; The Legions of the Mist and its sequel The Wall at the Edge of the World; and Shadow of the Eagle, the first in The Borderlands, a new Roman series. She grew up in Ojai, California, and developed a fascination with the Romans when a college friend gave her Rosemary Sutcliff’s books to read.

As Amanda Cockrell, she is the author of The Deer Dancers and The Horse Catchers trilogies, set in the pre-Columbian Americas; and the contemporary novels Pomegranate Seed and What We Keep Is Not Always What Will Stay.

After a checkered career as a newspaper feature writer and a copywriter for a rock radio station, she taught literature and creative writing for many years at Hollins University in Roanoke, Virginia, where she now lives.

The Shadow of the Eagle

The Wall at the Edge of the World

The Legions of the Mist 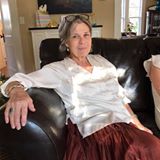