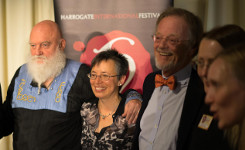 Since our Incorporation as a limited company in July 2014, all those who join become MEMBERS of the company, with a limited liability of £1.  By applying to be a member of the Historical Writers’ Association you agree to our Articles of Association, as agreed at the 2014 AGM. These articles are available upon request from our administrator.

We welcome membership applications from authors of full-length historical works, both fiction and non-fiction, published, or scheduled to be published, in the traditional way by a recognised publishing house, and their agents, editors and publishers. Membership is limited to those authors with work published in the last five years. In occasional cases, where an author does not meet our publishing criteria but has demonstrated exceptional acknowledgement by the media or industry, the committee may choose to consider their application on a case-by-case basis. For the avoidance of doubt ‘historical’ shall be defined as being beyond 35 years from the point of application.

Full Membership is open to persons or organisations based in the United Kingdom who have within the five years prior to first applying to become a Member:

-had at least one full-length novel, novel-length collection of short stories or non-fiction work with a predominantly historical theme published by a recognised publisher; or

-written and had produced by a recognised industry professional at least one feature film script or a number of shorter screenplays with a predominantly historical theme; equivalent in total to a full book-length work  or

– written a script or scripts with a historical theme which has been broadcast on national radio or television and equivalent in total to a full book-length work.

Associate Membership is open to persons or organisations based in the United Kingdom who are not writers but are in their professional or occupation engaged or associated with historical writing which includes but is not limited to publishers, literary agents, reviewers, booksellers and those connected with the production, publication or broadcast of any members’ work, whether in print, on stage, film, radio or television; or

– are civil partners, spouses or family members of a deceased Member

Overseas Membership is open to persons or organisations who are not based in the United Kingdom but otherwise fulfil the requirements of Full or Associate Membership.

If you’re a member of the Society of Authors, we offer a 25% discount on membership for the FIRST YEAR ONLY.